There are four basics area of concern that be considered while preparing and conducting combat operations. They are security, firepower, movement, and communications.

Surprise and freedom of movement are essential to the success of SO. These vital factors are based on accurate and timely intelligence. Because of the nature of SO, all aspects of OPSEC should be rigorously observed throughout the planning cycle and during the conduct of operations.

Although patrol members employ only individual weapons, they are better armed than most of the elements of their size. Becuase of the number of AWs, Grenade Launchers, and other specialized weaponary normablly carried, they can deliver a disproportinate volume of fire for their relative size. This can be a short-lived advantage, however, since the patrol can expend all or most of its ammunition within the first few minutes during an intense firefight. In order to effectively utilize this firepower, a patrol must:

Movement is necessary to reach mission objectives. It also is critical when avoiding unplanned enemy contact and when breaking contact. Movement of the patrol and its subordinate elements should be designed to put the patrol at an advatage and negate or minimize the enemy's capabilities. Effective movement is accomplished by:

The PL determines his patrol organization and patrol plan based on the following criteria:

The combat patrol must have an accurate assessment of the operational situation in order to develop the best plan of action. The acronym METT-T (mission, enemy, terrain, troops, time available) identifies the primary areas of concern. Intelligence updates, maps, charts, photos, and sketches should be used during the planning and preparation phase. Target selection is based on the following six CARVER factors:

The acronym OCOKA details the factors that should be used to analyze terrain. It is used as both a planning tool prior to the patrol as well as a working tool throughout the patrol.

The importance of recon cannot be overstated; it is essential in both the planning and conduct of patrols. It can be accomplished in several ways.

The patrol may be ordered to follow a specific route due to situation and mission requirements or it may be able to select its own route. OCOKA criteria, as discussed above, should be applied directly to assess patrol routes.

The methods that the PL will use to communicate with elements of his unit, artillery, air or other supporting units, and higher headquarters need to be identified. During extended patrols it may be necessary to establish communication windows and relay sites (fixed/airborne). WIP Section

The patrol spends more timemoving than fighting. Moving carelessly may cause a patrol to make contact with the enemy unintentionally or when the patrol is unprepared. The goal of effective movement is to make contact with the enemy on your terms, rather than his. The fundamentals of movement include: 1. Using covered and concealed routes 2. Avoiding routes or actions expected by the enemy 3. Conducting observation and reconnaissance prior to movement 4. Accurately navigating 5. Maintaining all-around security (including air guard).

Without a guide or unless familiar with the area, night movement may be difficult, but necessary to avoid detection.

Exercise firm noise and light discipline. The glow of a red lens flashlight may give away a position. A shield my be used when conducting a map study with a flashlight.

An essential tenet of successful small unit tactics is the ability of the PL to organize the unit to maximize its maneuverability.

Tactical maneuverability is the ability of the patrol to flexibly organize and reorganize to meet the current threat and conditions with minimum communication, while maintaining unit integrity and control.

Use of Maneuver Maneuver is used to describe the actions of a unit when one element is moving to a position to fight the enemy and another element is supporting that movement by fire.

The objective of maneuver is to move an element into a position from which it is possible to maximize destructive firepower against the enemy. In order to assist movement to such a position, a separate supporting element provides covering fire. Maneuver can be used in an offensive manner (e.g., in an assault) or defensively (e.g., to break contact or to counter an ambush). Proper understanding and use of maneuver is essential to good patrol tactics. This definition of maneuver includes these key points:

Weapons fire control is required by all when a patrol or element is fighting the enemy.

The patrol should not commence fire (unplanned) without analyzing the situation. If it is receiving ineffective fire only, it is possible the enemy has not pinpointed the patrol’s position. Opening fire prematurely will remove all doubt as to patrol location. Stealth is usually the best defense. Commence fire when:

Constant training in map and compass skills in a variety of environments is required to maintain navigation proficiency. Some of the key principles to successful navigation are listed below:

Keep yourself oriented at all times. As you move along, observe the terrain carefully and mentally check off the distinctive features you noted in studying and planning the route. Many aids are available to help you check and double check where you are and where you are going. 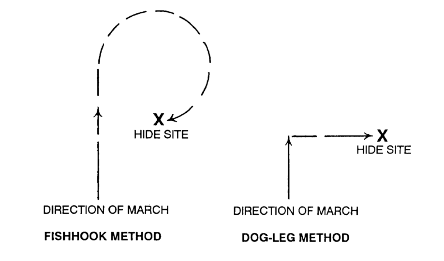 Baseline perimeter radius should allow each man to see the men on either side of him. Size depends on illumination, cover, terrain, and situation. Perimeters can be set in various formations to take advantage of patrol composition and the terrain.

Rest is a weapon; use it to your advantage.

Breaks must be called frequently to give opportunities for rest, observation, and listening. Terrain difficulties will usually dictate when to take breaks. “Halt”, “rest” and “break.” means the same thing.

The patrol can go only as fast as the slowest man. Remember the RTO and AW men are carrying the greatest weight. It is better to take breaks early to maintain stamina rather than push men to fatigue.